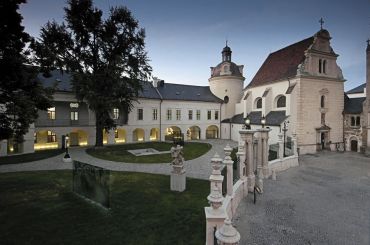 Beautiful city of the Czech Republic Olomouc is famous for its architectural buildings, which include complex Přemyslid Palace including Zdikov Palace and Cathedral of St. Wenceslas.

In the second half of the 13th century on the adjacent territory Zdikovomu palace was built dean of the chapter of the residence, assistant bishop. Later residence was rebuilt in Renaissance style and is attached to the palace. During the Thirty Years War, the building was damaged significantly. During the recovery period in the 18th century interior of the building was decorated with stucco and painting.

The structure of the residence includes Dean St. Barbara Chapel, founded in the 12th century Romanesque tower. It is decorated with a Baroque dome and spire, which secured a gilded statue of the Christian martyr.

After World War II, the palace complex were Přemyslid restoration work, and in 1988 all the buildings were open to the public.

In 1995 Olomouc visited John Paul II, who found it necessary to create the Archbishop's Museum. In 2006, after extensive renovation, the museum was open, and the complex became known as the Palace Museum Zdikova Archbishop.

Now the museum is located in a residence dean, contains a unique collection of articles devoted to religious topics. Permanent exhibition represents the spiritual culture of the Olomouc Archdiocese. In the gallery of the museum a unique collection of paintings from the 16th century. Very popular Mozart Hall, named in honor of the great composer, who once resided in the palace.

Archdiocesan Museum is a real treasure of the spiritual world. Its collection includes more than 65,000 exhibits, which include paintings, sculpture, applied arts, drawings, photographs and much more. In addition, the museum presents the exhibition of archaeological finds, whose age is six thousand years.

The museum is open to visitors every day except Monday, from 10 to 18 hours.