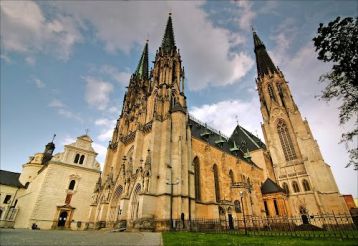 In the Czech city of Olomouc is an ancient Catholic church named after Saint Wenceslas, the patron saint of Bohemia. When life kind of Prince Wenceslas Přemyslid first in the country to Christianity because of what was lost from the hands of his brother Gentile. After the death of the prince was canonized by the Catholic Church as a saint.

Amazing Gothic cathedral is the main attraction and symbol of the city. One of the three towers of the temple, more than a hundred meters in height, is the highest in Moravia.

Construction of the cathedral was begun in 1104 - 1107 years when Prince Sviatopolk. Later the construction was continued under the auspices of Bishop Jindřich Zdika. During the long centuries of the cathedral several times changed its appearance, after a fire in 1265 the church was rebuilt in the Gothic style. At the end of the 19th century Cathedral of St. Wenceslas purchased Gothic look. As recently as the early 21 th century, the church was reconstructed. Now renovated temple is even more picturesque monument of medieval architecture.

Now, walking through the territory of the cathedral, you can admire the Gothic columns of the 13th century, see the massive chancel area of 35 by 23 meters. Under the presbytery is the crypt with graves of princes, cardinals and bishops, who are also allowed to visit. Temple includes a chapel of St. Stanislaus, made ​​in the style of Mannerism. Near the entrance to the chapel placed tombstones 16 -17 centuries.

St. Wenceslas Cathedral is amazing architectural heritage and custodian set shrines, including the casket containing the remains of St. John Sarkander. Here you can see the most excellent musical instrument in the Czech Republic - Body Romantic period. In addition, the temple is famous for its unique beauty in the form of the ark of the tabernacle, which is decorated with four diamonds.