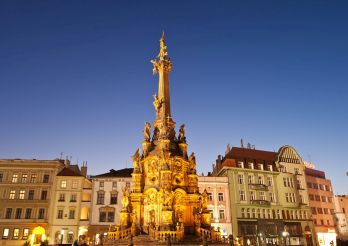 In the Czech city of Olomouc has many important religious buildings, one of which is the Holy Trinity Column, or plague column, located on the Upper Square.

Plague Column view called religious monuments, construction of which was common in the countries of Central Europe. These columns were built in gratitude for deliverance from the plague in the Middle Ages which claimed millions of lives.

Holy Trinity Column in Olomouc is the most grandiose model such structures. Its construction was started in 1716 by the architect Wenzel Raeder and lasted until 1754. During all this time to work on the creation of the plague column participated many sculptors, painters, masons and architects. Talent and hard work of these people and now we can wonder, looking at this architectural creation.

Column height is 35 meters, and built a chapel inside the column. Column surmounted by a spire with the image of the Holy Trinity, near which are sculptures of the Assumption and the Archangel Gabriel.

Three-level column base 18 sculptures adorn the saints and 14 reliefs. On the upper level presents sculptures of people who are connected with the earthly life of Jesus Christ, as well as three bas personifying faith, hope and love. At the middle level are sculptures of Czech and Moravian saints, and the lower level is decorated with statues of St. Maurice, the patron saint of the Czech Republic Vaclav and other saints sculptures which are located between the bas-reliefs of the twelve apostles.

In the chapel of the column can be seen bas-reliefs depicting the deluge, Cain and Abel, Isaac and the crucifixion of Christ.

Amazing religious sculpture Olomouc plague column enthrall with its beauty and sincerity. Sacred monument is a symbol of the triumph of faith over the disease, as well as the pride of the city, its main attraction.

Since 2000, the Holy Trinity Column in Olomouc is a UNESCO World Heritage Site.